All articles tagged with "Human Toilet"

Mistress Emily did not like what this guy had done to her sister. He had broken her heart an she was crying and inconsolable. To punish him, she looked for him and when she found him, she forced him to eat her shit. She wanted him to be as miserable as her sister was and she managed to do it by shitting on the guy and having him swallow the shit.

Mistress Gaia does not like to punish a slave all the time. She prefers punishing a slave once and that being enough for a long time. She only does this after learning the slave and knowing what the best punishment would be. Today she was punishing this slave and the best way she came up with was shit fetish. She forced him to eat her shit and swallow it and he never repeated his mistake again.

Mistress Contessa hates to remind slaves what to do. She found out mistress Rosella had the same problem and the two of them discussed how to make slaves remember things. They settled on using scat fetish to punish them. The mistresses took turns to go to each other's houses to humiliate the slaves. They humiliated them together and the slaves had to eat shit from two mistresses, as if shit from one mistress was not had enough.

Mistress Anna had never tried scat fetish. Today was her first time. But from the way she enjoyed it and from the way she was shitting on the slave, one would have been forgiven to think she had done it for years. She did it calmly and did not look like she was nervous at all. She felt great having someone eat her shit and when she was done, she knew she would definitely do it again.

Mistress Alina shits in a store

Mistress Alina was pressed. She had diarrhea and when she ran to the toilet, she found all of them occupied. She was in the store and she could not do anything about it. She had to shit or else she would shit on herself. She saw a plate nearby and the attendant was not looking so she shit on the plate and got out in a hurry before anyone noticed.

Mistress Gaia realized her slave needed a lot of training so she did it. But to make sure he learned as fast as he could, she used her shit fetish to give the training. She forced him to eat her shit after she had caged him, and true to what she had suspected, she realized he learned as fast as he could so as to avoid any more punishments like that.

Mistress and her shit fetish

This mistress has a thing for shit. She loves the whole process of shitting and she does it as often as she can. She likes how she is able to torture guys with it as well as have fun on her own. She enjoys making guys eat her shit and when she is alone, she prefers to tape herself shitting and then see her anus and the kind of shit that comes out of her body. 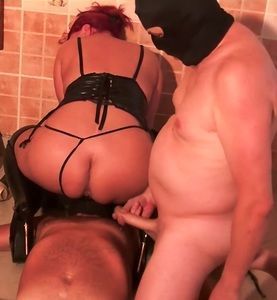 Mistresses degrade guy and make him pay his debt

Mistress Anna and her friend princess Nastia are debt collectors. They were sent to this guy who had refused to pay his debt. The mistress did not tell him what they wanted. They played nice and he thought they were ladies of the night. When they entered his house, they humiliated him by tying him up and shitting on him. They tortured him till he agreed to give them the money that very day.