Queen Sylvy wanted to punish this guy. She wanted the punishment to be worth it so she did all she could to make sure of that. She practiced so that when she finally did it, it would be great. She settled on shit fetish and she even practiced how to do it to him. She wanted him to be her human toilet so she practiced on a real toilet before she turned him into one.

Mistress Rosella had a party for her friends. Her friends are crazy and love to do nasty things. They thought they had tried everything but she had a trick up her sleeve. She made them try shit fetish, which they had not thought about. She even had a slave for them to shit on and the mistresses tried it and they loved it. They all had a great time together.

Not everyone loves shit fetish but this mistress does. Goddess Antoanella loves to shit on guys. She considers it her talent and she does it as a sport. She however likes to mess with guys who piss her off because that gives her a good reason to do it. Today this guy was making noise so she punished him cruelly using her shit fetish. She took a shit directly into his mouth. 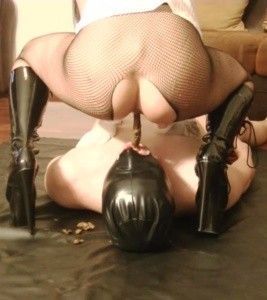 Mistress Anna had diarrhea. She could understand how she had it but she suspected it had to do with her slave. She did not want to suffer alone so she suffered with him by making him eat her shit. He had to be her toilet slave for the entire time she had diarrhea so that he would know how to avoid giving her things which gave her an upset stomach.

Mistress Gaia does not like guys with small penises. She knows they cannot satisfy her and that is why she did not allow this guy to mess with her. She had been excited about fucking him but when he undressed and she found out he had a tiny dick, she punished him for wasting her time. Mistress Gaia shit on him and told him never to go anywhere near her.

Mistress Anna did not like how this guy abused his wife and kids. They were living miserable lives and it seemed like no one would come to their rescue. She had to so she stormed into their house one day and she beat the shit out of him. She also had him eat her shit and she did it in front of everyone so that he could not dare do anything to them because of the shame and the guilt as well as knowledge that if he did, she would beat him again.

Mistress Gaia had warned her slave enough. It was now time to act and she wanted to humiliate her slave for what he had done. She cruelly forced him to undress and she tied him up. She then made him lick her ass before she turned on him and she made him eat her shit. She took a dump directly into his mouth and he had to eat all of it.

Goddess Antonella wanted to prove to her slave that she was not one to mess with. She forced him to lie down and she fed him her shit. He tried to plead with her to punish her with anything else he wanted except the poo but she could not listen. She made him eat her shit and told him she had worse things to do to him if he did not style up.

Lady Marie and her friend mistress Michelle had long warned this guy against messing with them. He never listened and now he had himself to blame for what was about to befall him. The mistresses taught him a cruel lesson by forcing him to eat and lick their shit. The mistresses degraded him and had him do all kinds of nasty things without caring about what would happen to him.